Technically, I am qualified....

I have been asked by people who were simply curious, “What made you think you could write and illustrate a book?“ I have always been crafty and taken art classes my whole life, and have two brothers who are writers, but I guess that doesn’t technically qualify me….

In 2004, our friend’s son passed away a month shy of his 4th birthday from an aggressive brain tumor.  Our daughter was almost 2 when he passed away and she asked, “Do you celebrate your birthday in Heaven?” I remember that struck me as very “coincidental” because we did not mention his upcoming birthday. That is the first question I wrote down, I didn‘t know why, but I wrote it down.

Then in 2005, another friend’s daughter passed away at the age of 6 after a sudden illness. Our children were now 3 ½ and 1 ½, and a week later my oldest asked, “If I let a balloon go, will it go all the way to Heaven?” Also coincidental, as she did not attend the funeral and see the school-age children releasing balloons at the service. That was the second question I wrote down of many more to come, thinking “I should do a children’s book”

Some time later, we had dinner with our former pastor from Savannah and his wife. I had my folder of questions in the car. I shared my book idea with them and said I wanted to represent Jonathon in the book. At the end of dinner, Carol told me how 9 months after Jonathon died, his sister said “Mommy, I know what Jonathon does in Heaven! He paints the rainbow!” Little did she know, “Mommy, who paints the rainbow?” was just asked a week earlier and it was written down in the car. 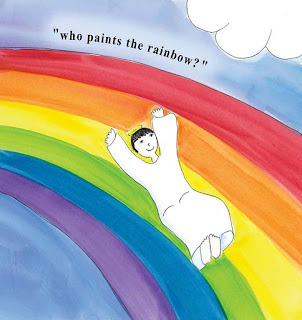 You could have blown me over with a feather, and I knew at the moment, it wasn’t a matter of “I should do a book" it was, I “have” to do this book.  I began to tell people with a new confidence and determination, that I was going to do this book, I wasn’t sure how yet… but I was sure…

So, now you may ask… what qualifies me to do a blog? Well, I have two brothers that have blogs, so technically, I must be qualified!